The bond market is heavily influenced by economic data and in recent history by the major central banks around the globe. The responsibilities of central banks vary some by definition and country but in general, they are responsible for formulating and implementing monetary policy. Monetary policy is implemented to influence the money supply and the level of interest rates (typically effecting the short term rates) with the intent of keeping an orderly economic environment in terms of production (output), prices and employment. There are several methods by which the central banks can influence these objectives one of which is quantitative easing (QE), a practice where the central banks conduct open market purchases of securities. The act expands the central banks’ balance sheets and in theory injects money into the markets to encourage growth. The central bank will credit an institution the money required to make these purchases, essentially “creating” money in the form of bank reserves.

The world’s four most influential central banks are: The Federal Reserve (Fed), the European Central Bank (ECB), the Peoples’ Bank of China (PBoC) and the Bank of Japan (BoJ). Since around the Great Recession of 2008, the world’s central banks have been particularly active, each going through time periods of their version of QE and all expanding their balance sheets significantly while pumping money into the markets. 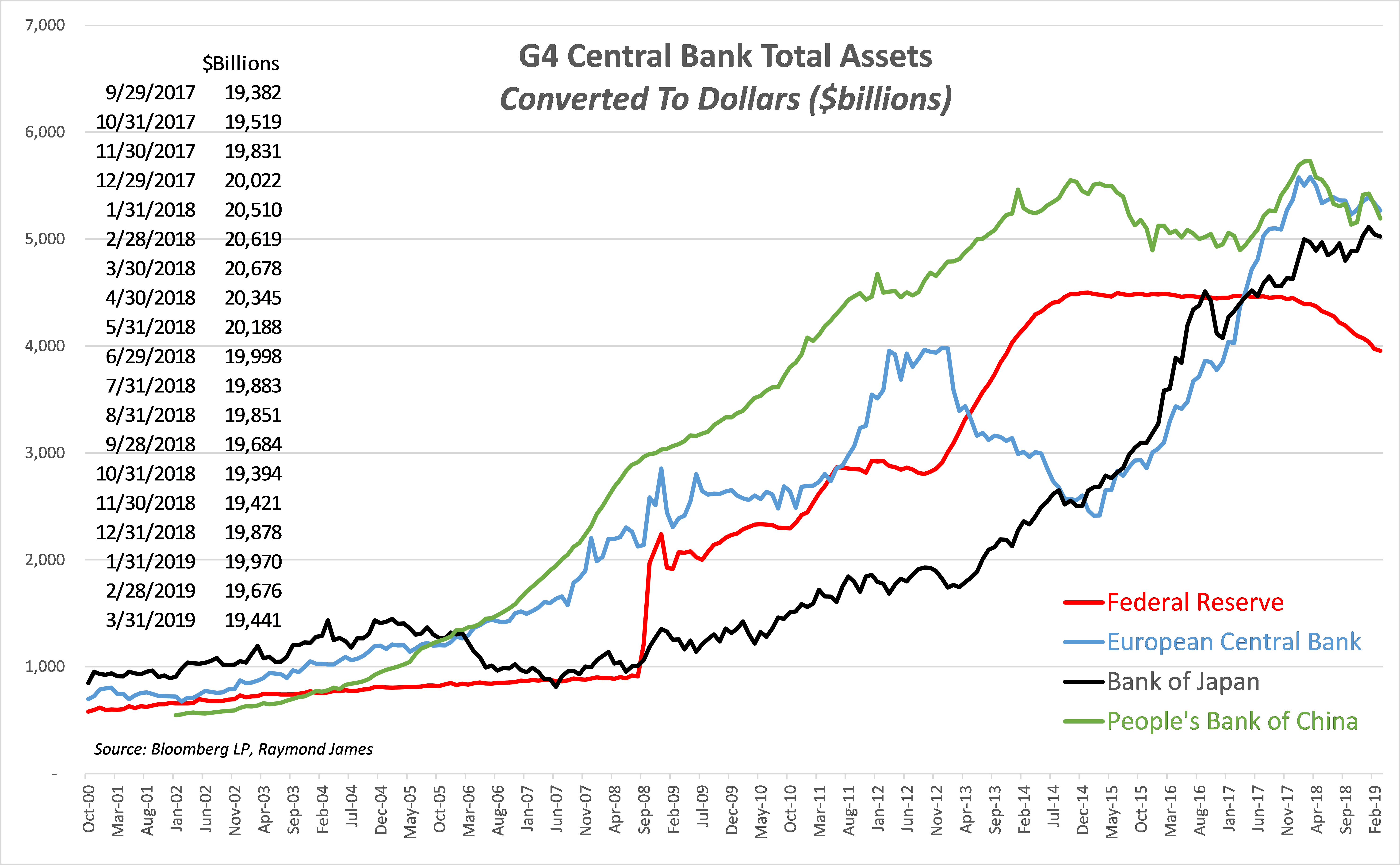 In the past 2 weeks, the ECB, PBoC and BoJ have announced their most recent monetary policy plans, and in each case, they have announced no change. In other words, they are remaining accommodative. This “staying the course” is poised to keep short term interest rates suppressed in the hopes of stimulating growth. Although the ECB and Fed are not actively making open market purchases, their monetary policies also remain accommodative. The Fed announces its latest rate decision on Wednesday and the anticipation is that they will also do nothing (or stay accommodative).

With the central banks maintaining the same course, it is likely that their accommodative monetary policies will continue to operate as tremendous headwinds to higher interest rates. More of the same and an incentive to keep invested. Trying to predict interest rate movements and basing investment decisions on what might happen could prove to be costly if for example, investable assets were left idle versus aligned for long term investment plans. Many investors allocate money to fixed income to help balance risks taken with growth assets and as a means for predictable income streams. Fortunately, long term fixed income planning is not necessarily dependent upon an interest rate prognosis. The laddered approach allows an investor to diversify among maturity dates, therefore eliminating the need to time the market while providing consistent and predictable cash flow and income.

As long as the central banks maintain their course, don’t anticipate a drastic reversal of our current interest rate environment and maintain your long term fixed income investment approach.

The author of this material is a Trader in the Fixed Income Department of Raymond James & Associates (RJA), and is not an Analyst. Any opinions expressed may differ from opinions expressed by other departments of RJA, including our Equity Research Department, and are subject to change without notice. The data and information contained herein was obtained from sources considered to be reliable, but RJA does not guarantee its accuracy and/or completeness. Neither the information nor any opinions expressed constitute a solicitation for the purchase or sale of any security referred to herein. This material may include analysis of sectors, securities and/or derivatives that RJA may have positions, long or short, held proprietarily. RJA or its affiliates may execute transactions which may not be consistent with the report’s conclusions. RJA may also have performed investment banking services for the issuers of such securities. Investors should discuss the risks inherent in bonds with their Raymond James Financial Advisor. Risks include, but are not limited to, changes in interest rates, liquidity, credit quality, volatility, and duration. Past performance is no assurance of future results.