Results May Not Be Altered but Things Are Different

Results May Not Be Altered but Things Are Different

The bond market is showing some volatility, only not necessarily in the direction anticipated by many experts and investors. Perhaps the great bull bond market is not quite ready to surrender. The month of March saw a significant Treasury rally, pushing yields down across the curve by as many as 32bp. 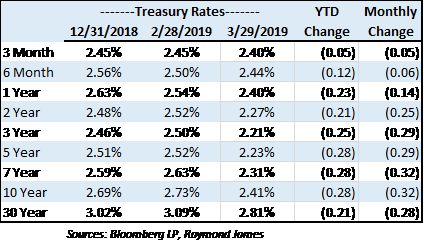 There are many factors affecting the market, not the least of them of course is the Fed which could be argued as the entity choreographing how these markets have unfolded for some time now. The Fed’s reversal on their tightening policy and path to “normalize” interest rates, weak European data and waning corporate earnings continue pushing and pulling nervous investors to and from safe haven assets. As it stands, US securities may represent the best on both fronts. There remains a wide divide in sovereign debt yields. Before brushing off the old cliché that “this time is different”, recognize that conditions have been different for some time now.

The big “miss” may be in Europe’s ability to right the ship. It has long been assumed that global interest rate disparity would diminish as economic conditions improved pushing European interest rates higher. It is beginning to look as if US rates may continue dropping more toward inferior global interest rates. Weak conditions and political strife around the globe continue to impede progress and create continued demand for more attractive US rates. This demand is a headwind to higher US rates. Germany, Switzerland and Japan all have negative 10 year yields. According to the Bloomberg Barclays Global Aggregate Negative Yield Debt Index, there is now over $10.3 trillion dollars, or 20% of the world’s investment grade sovereign debt offering negative yields. Global central bank intervention continues to expand ballooning central bank balance sheets. Quantitative Easing (QE) was originally established as an emergency measure but has recently been described as a routine tool (along with QT/Quantitative Tightening) for the Fed to control money supply.

The month of March also introduced a glimpse at an inverted 3-month Bill to 10-year Treasury. The curve flirting with inversion garners much attention as inverted curves have been the prelude to the last 4 recessions. There are notable differences to consider but not necessarily suggesting the market ultimately ends up with a different fate. First, the Fed has never carried this large of a balance sheet (peaking at $4.5 trillion, now ~$4 trillion). While building the balance sheet the Fed maintained a Zero Interest Rate Policy (ZIRP) for over 7 years. Upon examination, when the Fed moved to a tightening policy (raising the Fed Funds rate), it could be argued that they were getting ahead of an issue such as inflation. This time, the Fed simply appeared to be moving toward “normalized” rates. Starting to raise from 0.00% certainly feels different than starting from 4.75%, 3.00% or 6.50% (the last 3 starting points historically/not currently when the Fed  began hiking rates).

The previous 3 inversions occurred within an average of 1.5 years from the Fed raising interest rates. This time, the Fed began raising interest rates in December of 2015, 3.3 years ago. The pace of the Fed hikes has also been stretched out. Also noteworthy is that from the time the curve begins to invert, it has taken 1.5 – 3 years for past recessions to start.

If the past is any indication, even when the curve inverts, it lasts about 12 months. Within 2 years of inversion, the slope has gravitated to a slope of 200 bp. However, the past is no guarantee of the future and as pointed out, the yield curve and many of the market conditions are very different. Regardless of the ultimate fate of the curve, the overriding emphasis during these undetermined times is protecting your principal.  As interest rates fall, don’t abandon investment discipline. The fixed income allocation is the easy part. Individual bonds ride out the storm. Barring default and when held to maturity, from the day an individual bond is purchased, the cash flow, income and day of redemption do not fluctuate, despite market pricing changes.

The author of this material is a Trader in the Fixed Income Department of Raymond James & Associates (RJA), and is not an Analyst. Any opinions expressed may differ from opinions expressed by other departments of RJA, including our Equity Research Department, and are subject to change without notice. The data and information contained herein was obtained from sources considered to be reliable, but RJA does not guarantee its accuracy and/or completeness. Neither the information nor any opinions expressed constitute a solicitation for the purchase or sale of any security referred to herein. This material may include analysis of sectors, securities and/or derivatives that RJA may have positions, long or short, held proprietarily. RJA or its affiliates may execute transactions which may not be consistent with the report’s conclusions. RJA may also have performed investment banking services for the issuers of such securities. Investors should discuss the risks inherent in bonds with their Raymond James Financial Advisor. Risks include, but are not limited to, changes in interest rates, liquidity, credit quality, volatility, and duration. Past performance is no assurance of future results.