Clearly I have been “sitting here in limbo” for the last few weeks relaxing in Key West, which is a profoundly different planet. I love it! We stayed at Casa Marina, a resort I would highly recommend to anyone. So while I was limbo, it would seem as though the stock market was in limbo, as well. When I left, the S&P 500 (SPX/2907.41) was changing hands at 2885.25, and when I returned 11 days later (last Thursday), the SPX was at 2888.32. Given that, one would think not much has happened in the past two weeks, but nothing could be further from the truth. Verily, on Friday, the SPX exploded on the upside (+19 points) on what the media attributed to the JP Morgan better-than-expected earnings report, decent Chinese economic news, and Chevron’s acquisition. Yet, as market wizard Leon Tuey writes:

Good morning, this morning, pundits are attributing the strong rally to the “surprise” results from JP Morgan and “better-than-expected” trade data from China which rose 14.2% compared to the consensus estimate of 8.7%. Why the big “surprise”? As noted in my reports, in 2013, JP Morgan broke out of a 13-year base which signaled a secular bull market. Others such as BK which broke out of a 15-year base in 2016. Also, in 2016, both BAC and MS broke out of an 8-year base. I concluded that all will post record highs in the current bull market. As for China, in recent years, numerous measures such as multiple cuts in the RR, tax reductions, increasing loans to small businesses, infrastructure build-outs, etc. were applied to stimulate the economy. Also, global growth is recovering. Hence, why the big “surprise”? The pundits are “surprised” because they don’t understand the market’s logic and they don’t listen. As the Dalai Lama noted: “When you talk, you are telling people what you already know. When you listen, however, that’s how you learn something new.” From another article this morning:

“Strong bank earnings could give investors more confidence in the underlying economy, and JPMorgan Chief Executive James Dimon further underscored this message in a statement Friday, saying that, “Even amid some global geopolitical uncertainty, the U.S. economy continues to grow, employment and wages are going up, inflation is moderate, financial markets are healthy and consumer and business confidence remains strong.”

Hope the gumflappers are listening, particularly the bears! Last night, the Advance-Decline Lines for the NDX, NYSE, MID, & SPX all closed at record highs. Those who are still waiting for a “test of the December low” are waiting for Godot.

Of course I, too, have been adamant that the December lows would never be retested despite the “cat calls” from the false stock market pundits so prolific on the Street of Dreams! So, the last time I wrote was on April 1, and this is what I wrote:

My work continues to suggest there is not much downside risk here with the grind higher likely to extend into June on an intermediate-term basis. Last week’s rally put some distance between the much watched 2800 level on the S&P 500 and last Friday’s close. Still, the SPX has not broken out to the upside. What has happened is that last week’s wobble created a double bottom in the charts. The first low came last Monday (3-25-19) at ~2785. The secondary low came on Wednesday (3-27-19) at 2787. From there, the SPX rallied some 49 points into Friday’s intraday high. Despite the end of the quarter ebullience, my work continues to show there are doubts about the SPX’s ability to breakout above the March 21, 2019 intraday high of ~2860. That suggests the SPX may just consolidate in a sideways fashion. Accordingly, it will be interesting to see what happens this week now that quarter end’s window dressing is over.

So, strategically, the “call” for a grind higher into June looks to be correct. However, the tactical “call” about doubts that the SPX can break above its March 21 intraday high on this move was clearly wrong. The recent rally has left the S&P 500 Total Return Index at new highs, begging the question can the S&P 500 market cap weighted do the same thing? I think it can. Pointing the direction was the fact that a number of S&P 500 sectors made new 52-week highs last week with Technology, Communication Services and Real Estate being the standouts (chart 1 below).

The rally, however, has left many of the indices I monitor overbought on a short-term trading basis (chart 2, page 3). This suggests that the SPX could potentially stall for a few sessions as its internal energy gets rebuilt for another vault higher, which is what my work points to. That does not mean there are reasons to “sell” here, but rather a bit more caution in chasing stocks higher.

The call for this week: My work suggests a touch of caution here on a trading basis. My short-term internal energy indicator is out of gas. The intermediate energy indicator is neutral, but the long-term energy indicator remains highly bullish. The SPX is in a position, after a pause, to trade above its all-time high (~2940) and trade above my often mentioned target of over 3000. Regrettably, very few participants believed it, imbibed by Wall Street pundits’ chants of stock market crash, recession, an earnings recession, too much optimism, well you get the idea. The problem remains that there are not enough of us that are old enough to remember the 1949–1966 or 1982–2000 secular bull markets! In both of those secular bull markets, there were declines of over 30%, but it did NOT end the bull market.

This week is expiration week, which will be interesting to watch given that the market will be closed for Good Friday. First quarter earnings results arrive this week that could give stocks an upward bias, yet my work still suggests a stall. Additionally, it is Golden Week in Japan with their markets being closed for sixsessions. This morning, the S&P 500 futures are flat as U.S. negotiators tamp down demands with China on a trade deal. 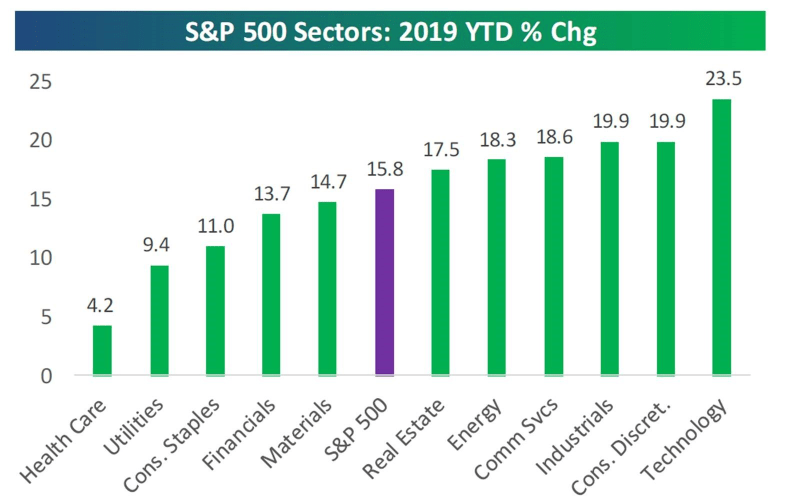 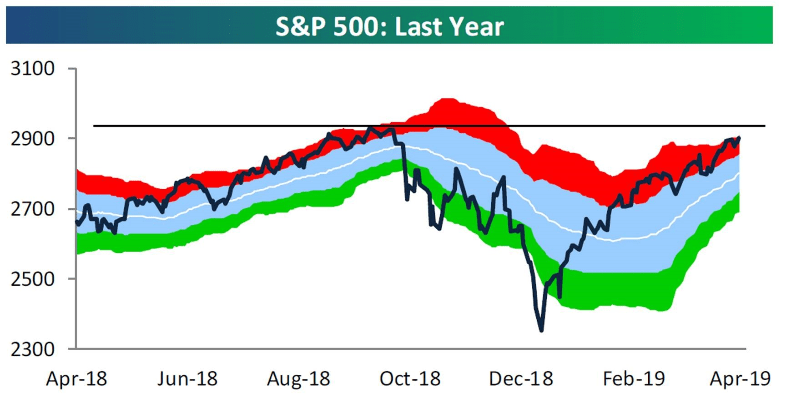 Additional information is available on request. This document may not be reprinted without permission.

RJ&A or its officers, employees, or affiliates may 1) currently own shares, options, rights or warrants and/or 2) execute transactions in the securities mentioned in this report that may or may not be consistent with this report’s conclusions.

The opinions offered by Mr. Saut should be considered a part of your overall decision-making process. For more information about this report – to discuss how this outlook may affect your personal situation and/or to learn how this insight may be incorporated into your investment strategy – please contact your Raymond James Financial Advisor.

All expressions of opinion reflect the judgment of the Equity Research Department of Raymond James & Associates at this time and are subject to change. Information has been obtained from sources considered reliable, but we do not guarantee that the material presented is accurate or that it provides a complete description of the securities, markets or developments mentioned. Other Raymond James departments may have information that is not available to the Equity Research Department about companies mentioned. We may, from time to time, have a position in the securities mentioned and may execute transactions that may not be consistent with this presentation’s conclusions. We may perform investment banking or other services for, or solicit investment banking business from, any company mentioned. Investments mentioned are subject to availability and market conditions. All yields represent past performance and may not be indicative of future results. Raymond James & Associates, Raymond James Financial Services and Raymond James Ltd. are wholly-owned subsidiaries of Raymond James Financial.